A History of Royal Silverware 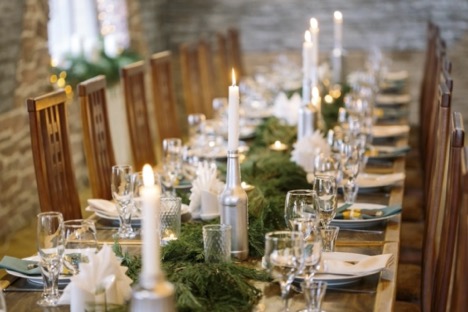 Sitting down to dinner? Before you pick up that knife and fork, be aware that there are a whole lot of royal shenanigans in that silver set. What has become common eating practice, and I mean both normal and of the “common” class, was popularized and shaped by a sordid royal history.

Take, for example, the strange case of Maria Argyropoulina, who in the 11th century married the Doge of Venice. When she produced a gold fork at the nuptial feast, she caused such a stir that local clergy said “God in his wisdom has provided man with natural forks—his fingers. Therefore, it is an insult to him to substitute artificial metal forks for them when eating.” When she died a few years later from plague, Saint Peter Damian called her demise “God’s punishment for her hateful vanity.”

Noble interest in silverware has not always been so . . . damnable. It has, however, been long lasting and is largely why we celebrate the beautifully patterned, sparkling sets we dine with today. Our earliest utensils were, of course, the ones we carry with us everyday, our hands. And cultures in Africa, India, and the Middle East continue the practice of eating with their hands. Tooled utensils have quite a long history as well in our dining practices, with the knife dating back as an eating implement to at least 1,000 BCE, where it was used not only to cut, but also to hold food in place by stabbing it with the tip.

Early utensils were shaped from available materials such as shells and wood, with the spoon being one of the earliest implements, often fashioned from a shell attached to a wood handle. In fact, the word “spoon” has its roots in an Anglo-Saxon word meaning “chip of wood.” Later, though, nobles would pay to have utensils made from precious metals, sometimes encrusted with gem stones, and these emblems of wealth were carried in boxes to whatever gatherings the royals might attend.

This is, in essence, how the humble utensils of the early world spread to other cultures. Catherine de Medici has been credited with introducing the fork across Europe, for example, in 1533 when she brought them back from Italy to France. Historical records show, however, that 200 years earlier Charles V of France included forks in his inventory for eating such foods as mulberries that might stain the fingers (and, heaven forbid, the royal clothes). We also know that forks, although denounced by English clergy in the vein of the Venetians, were part of Elizabeth I’s possessions in 16th-century England.

We can thank noble families not only for the spread of silverware, but also for its design. The blunt-ended table knife, for example, has its roots in two possible lines of development. First, Louis XIV of France, cognizant of the potential dangers of pointed blades at his table, made their use illegal in 1669. But, it may have been Cardinal Richelieu who roughly 30 years earlier set the precedent for a more mundane reason. He was offended by guests who picked their teeth with the points of their hunting knives at the table and thus prohibited guests from doing so. Either way, the blunt-end knife we now use for dining was born.

Nobles also, because they had the money to do so, were able to pay for metal alloys to be used in creating dinnerware, which solved the problem of how quickly other materials degraded after heavy use. Copper alloys, steel sandwiched in iron, and even gold were used. But silver became a popular choice because of its luster, its malleability (allowing the intricate patterns we associate with fine silver), and its antibacterial properties. We can again thank royals for maintaining a historical record of silver so to speak. Louis XIV and XV both ordered silver items literally liquidated (melted down) to cover several financial crises, but because silver tableware produced such small amounts it was spared.

The Georgian Period saw the boom of silverware and the many forms in which we know it today. Lavish multi-course dinners of the time gave rise to the wide variety of implements you can now find. A knife, fork, and spoon was no longer enough. The spoon begat soup spoons and broth spoons, egg spoons and citrus spoons, demitasse spoons and ladles. Tables were set with lobster picks and crackers, with escargot tongs and oyster forks.

And, of course, with all this culinary excess came the commensurate set of operating instructions, the burgeoning series of books of etiquette. We can thank once again, a royal for that as well. The earliest book on dining etiquette dates back to the reign of Pharaoh DjedkareIsesi in 2,414-2,375 BCE to a set of rules known as the Instruction of Ptahhotep.

This article was written by Ivan Young , a writer from Happy Writers, Co. in partnership with designer silverware wholesaler, Silver Superstore.

WE’D LOVE FOR YOU TO SHARE THIS IN YOUR NEWSLETTER OR WEBSITE BUT PLEASE INCLUDE THE FOLLOWING COMPLETE INFORMATION: Event Producer Strategist, Entrepreneur, Speaker, and Coach, Annette Naif, CEO & Creative Director of Naif Productions

Naif Productions is a strategic event planning, design and production firm specializing in corporate, live coaching sales events, social, non-profit, and weddings. Based in New York City, we produce events worldwide from Fortune 500 clients and coaches to families and charities. Naif Productions specializes in helping clients attain their goals, realize return on investment, and achieve the most unique, creative experiences.

Since 1986 Annette Naif has been designing and producing custom events, helping clients create their unique style that translates into a memorable and profitable experience. Annette spent 17 years producing events in the motion picture industry where she helped coordinate numerous productions for film and episodic television programs. Since then Annette’s been running her own event production company, coaching other event planners, teaching an event operations and production course at NYU, and now is the CEO & Creative Director of Naif Productions.

Plus, you'll also receive a FREE subscription to our Newsletter!

Get your FREE eBook!